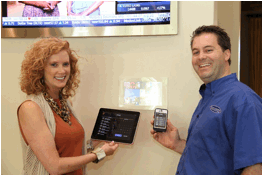 When Larry and Stacey Newcomb moved to Jonesboro, AR and built a new house, Larry knew he wanted flat screen TVs, and Stacey knew she wanted a pool for the kids. What neither of them knew was that they could control their entire home from their iPads and iPhones. Then Ryan Heringer, president of Jonesboro-based Sound Concepts, showed them the IP-based ELAN g! Control System.

"When we first met to discuss the technology that could be incorporated into their new home, the Newcombs simply wanted to know what I could do for their audio/video systems," said Heringer. "So I showed them the ELAN g!Mobile app and how it controls the audio/video, and then continued explaining all the other possibilities with the ELAN g! Control System. By the time I told them they could turn off every light in the house at once from an iPhone or iPad, they didn't want to live without it! And that's what is so great about the g! system — customers love the g!Mobile app and once they see it, they've got to have it."

According to Stacey Newcomb, they call their new home the "Magic House." They use iPads to dim the lights, turn on music, and adjust the heat and air conditioning, while an ELAN TS Series touch screen is set in the walls of nearly every room of the house. Stacey has the system set so all house lamps automatically turn on at 5 p.m. and turn off at 10 p.m., eliminating the need to walk through the house to make sure all the lights are off before retiring for the night.

From a peace of mind perspective, the Newcombs can be assured that their twin daughters are home on time with the ELAN g! Control System, which tells the user which TVs and lights are on, and informs them when people enter or leave the house, and through which door.

The Newcomb's fully integrated $200,000 ELAN g! Control System controls all 156 lighting dimmers in the house, the landscaping, and the pool house. Throughout the house and pool house are 23 pairs of ELAN speakers, offering 20 distinct zones of audio with a choice of 12 sources including 2 Sirius satellite radios, 2 AM/FM radios, an ELAN VIA!migo iPod dock, a VIA!dj digital music server, and even music from a player piano in the music room.

In addition, there are 10 TVs that can access four satellite feeds (one for each family member), two Kaleidescape Blu-Ray players, videos from iPods and the front door surveillance camera.

Atlanta Audio has chosen the Elan g! system for home automation and we would be happy to demo the system in our showhouse. Please call for an appointment.